The Woman in Black

Susan Hill's book, The Woman In Black, is getting a lot of attention lately due to the soon to be (Feb 2012) film of the same name.  I first came across the story when I saw the play in London many years back, and it has stayed with me ever since.  I was able to get a copy (it was not that easy, believe me) of the 1989 television film, which I still enjoy very much.  It's old style creepy - not reliant on explosions and computer graphics.  After seeing the film I commissioned a drawing from the late Tom Heyman, of Woodstock, NY.  I present both the final drawing and its first version on this posting.  If you haven't yet read the book, it might be one of those that will be more enjoyable before seeing the new film.

Speaking of great ghost and horror stories, if you haven't seen it (in spite of our immense global readership  - over 17 subscribers and counting) please take note of an earlier posting on ventriloquist dummies, that includes information on the classic film Dead of Night.  This is a film not to be missed. 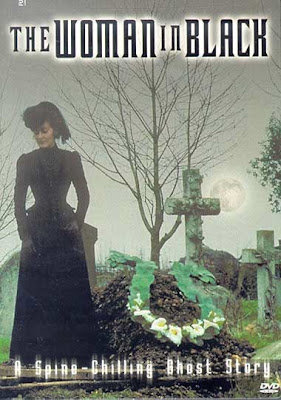 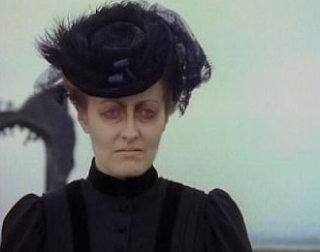 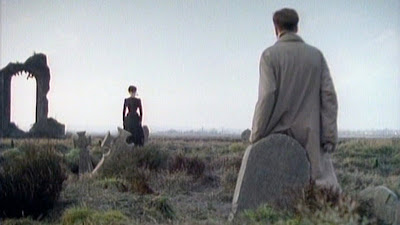 From the forthcoming (February 2012)  The Woman in Black, with Daniel Radcliffe.  I'm very interested to see this film.  I hope it lives up to its predecessor, and to the novel.  From trailer and publicity images, it looks very promising. 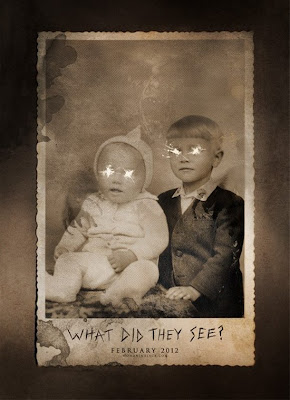 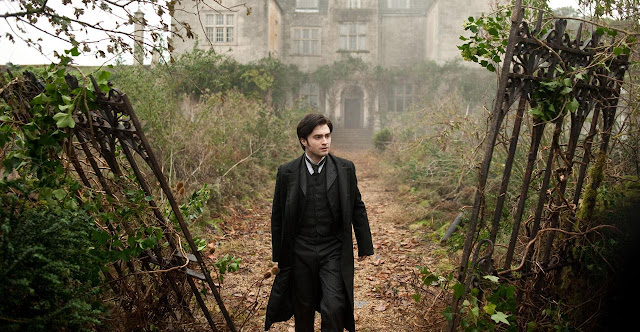 I came across this poem, which captures the spirit of the story.  Its author, Harry Boslem, says it is loosely based on a classic ghost story (I assume to be our story as it is published along side a still from the 1989 film).

The Woman in Black

She stalks me in the heat of the night,
A silhouette among the shadows,
She dances with the candlelight,
And speaks through my written memos,
I see her spirit in my mirror,
Mocking me with silent whispers,
Gone again with a moment's quiver,
One of these nights she will deliver.

I dread to sleep, I avoid my dreams,
I fear the spectre in the mourning dress,
This woman in black who haunts me,
With her evil, twisted, hellish face,
She comes and goes like a whispered word,
Traveling through the sands of time,
I fear so much, her spoken curse,
As it travels on the howling wind.

I have seen my fate written in her eyes,
It troubles me to know my truth,
If the whispers come again tonight,
They may just whisper to me, my death.
I fear the shadows twilight brings,
To my rooms unguarded boundaries,
And I feel my terror kindling,
Burning, nightmare images.

If only I could lift this curse,
I've tried so hard to break her spell,
But the words I chant just make it worse,
And God won't answer my appeal.
I fear there's no escape for me,
I fear it's her who holds my fate,
For the gypsy girl that I set free,
My fate will be to fill her grave.
By Harry Boslem
Published: 8/23/2010

Email ThisBlogThis!Share to TwitterShare to FacebookShare to Pinterest
Labels: The Woman in Black, Tom Heyman