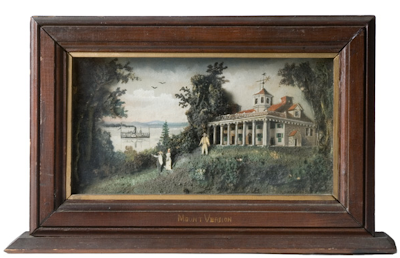 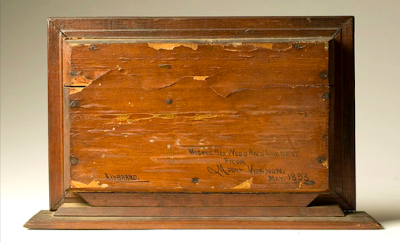 Source:  Cowan Acuctions
Description:  Dated 1893. A nicely detailed diorama featuring Mount Vernon on the right, three figures descending the hill, and a sidewheel steamboat on the Potomac in the background. On verso is a period inscription, A. LYBRAND. MOSSES, BOX WOOD AND LIMBES. FROM MOUNT VERNON MAY 1893. A singular work of folk art in its original, mahogany, shadowbox frame; 11" high by 18.5" (at base).


A. Lybrand probably refers to Archibald Lybrand (1840-1910), who was born and raised in Ohio (Pickaway and Delaware Counties). He enlisted in the Union Army on April 26, 1861 and served in Company I of the Fourth Ohio Volunteer Infantry. He served for three years, rising to the rank of captain. After the war, he served as mayor and postmaster of Delaware, having been admitted to the bar in 1871. In 1897, he began his two terms of service in the United States House of Representatives. After leaving Congress, he returned to his business and agricultural pursuits in Delaware. He died in Daytona, Florida in 1910.
Posted by Tom Casesa at 12:46 PM