Magic and Conjuring in Hells' Kitchen 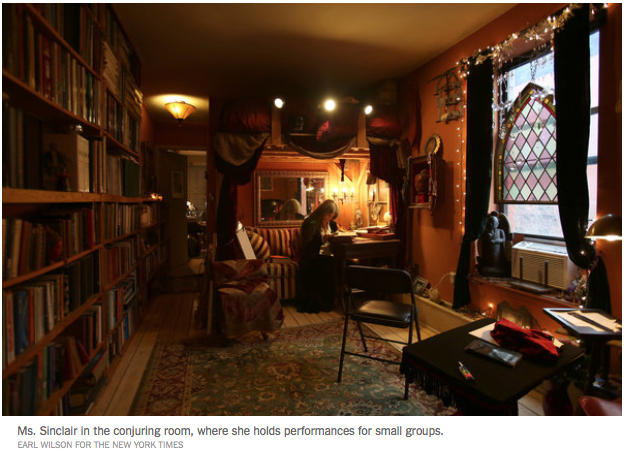 On the third floor of a tenement in Hell’s Kitchen, the sorceress awaits.
The walls of her lair are ocher, the curtains green crushed velvet. Books of arcane knowledge with titles like “Talking to the Dead” line one wall from floor to ceiling.
Customers file in. The sorceress wears a black velvet cape. Her dark hair hangs to her waist. She commands the spirits of the dead and reads cards with uncanny accuracy.
It is, in one sense, just a show. The sorceress is a magician named Belinda Sinclair; her visitors — 10 people make a full house — have paid $65 or more to watch an intimate performance, “A Magicienne Among the Spirits,” in a secret location. 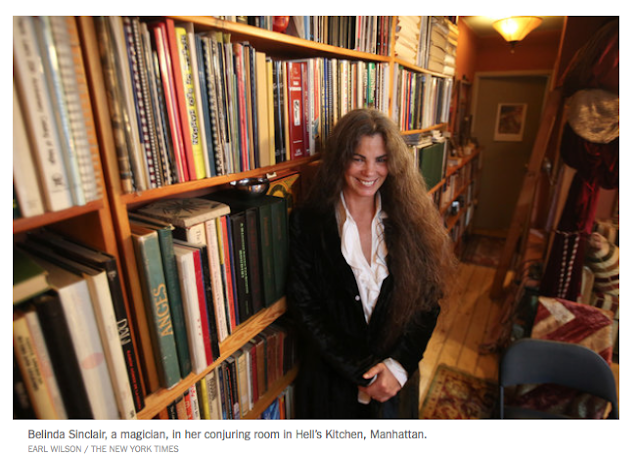 But it is also a history seminar on women and magic, and on the mediums and clairvoyants and psychic healers — some scammers, some benevolent — that first flourished in New York more than a century ago in apartments like Ms. Sinclair’s.
She calls the space her conjuring room. Only a few blocks from Times Square, it is crammed with more than 3,000 pieces of “female magician ephemera,” only part of her collection.

And it is a portal to a realm where soothsayers and seeresses and magiciennes emerge from the shadows to claim their place as creators: makers of illusions that help people see past their limits.

“Women, in one way or another, have been the quintessential Magi forever,” Ms. Sinclair said recently. 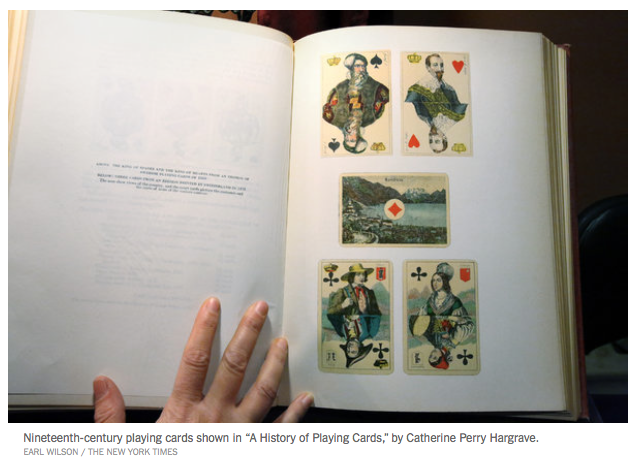 From the mid-1800s through the early 1900s, a craze for the paranormal swept the country, and New York was one of its centers.
Séances and trance demonstrations were held in concert halls and private parlors. The Fox Sisters amazed audiences by coaxing invisible spirits to respond to their questions with knocking and rapping noises. (One sister eventually confessed they made the noises themselves by cracking their joints.) Magazines were published here with names like The Spiritual Telegraph. Scientists studied spiritualists and sometimes concluded that their conjurings were legitimate.

The Spiritualist Register of 1861 listed dozens of professional mediums in New York City. There were many more, Ms. Sinclair said, under the radar and out of reach of the tax man, including, as time went on, quite a few in her neighborhood.
The soothsayers, Ms. Sinclair said, “came into Hell’s Kitchen, and they gutted these tiny spaces and tenements and created these sitting rooms.”

“The stage is set,” she said. “Inside of a discreet parlor, a private dwelling, there seems a person who might be able to shed some light on how to navigate this world. She now becomes the one they seek.”

A 1909 article in The New York Times, “One Thousand Fortune Tellers Plying Their Trade in New York City,” said that in the neighborhoods now known as Hell’s Kitchen and Chelsea, “There is a constant and ever increasing demand for their services.”
Many of these mediums and fortunetellers were con artists who preyed on the gullible, just as today’s storefront psychics are often accused (and sometimes convicted) of doing. But some clairvoyants, The Times wrote, “are actually power for good in their particular communities.”

“Since they know their people and the conditions about them,” The Times reported, “they are in a position to give much sound advice. They occupy the position of a priest or confessor.”

Perhaps the most prominent spiritualist of the era was Helena Blavatsky, founder of the esoteric movement called theosophy. Her Theosophical Society was based in an apartment on West 47th Street less than a five-minute walk from Ms. Sinclair’s place, filled with what an 1877 Times article called “elegant and curious bric-a-brac,” like a miniature crocodile swinging from the ceiling.
Madame Blavatsky would often channel spirits at the society’s gatherings there. “The whole room was rigged,” Ms. Sinclair said. “All of it.”
That building, in a truly impressive bit of transformation, is now an Econolodge.
At Ms. Sinclair’s conjuring room, a visitor immediately notices the books and pamphlets: “Secrets of Hazel Kolar, Queen of Mind Readers”; a tell-all autobiography by Lulu Hurst, “The Georgia Wonder,” put out by the Psychic Publishing Company.
There are nuts-and-bolts manuals for the working illusionist, like “Conjurers’ Hydraulic and Pneumatic Secrets.” One large green-bound typewritten manuscript, maybe 500 pages long and without an author attributed, is called simply “Collected Secrets.” It details tricks like the Keating Substitution Wrinkle and Long Distance Thought Transmission.

Tucked away are posters and prints of 19th-century magiciennes: a woman dressed in Viking-princess garb standing reflectionless before a mirror, a “prestigiatrice” pulling endless streamers from her mouth as men and women in fancy dress look on. In a drawer, there is a blob-shaped metal coin with a cross-legged mascot on the front and the name Anna Eva Fay, a stage medium who handed out the coins at her shows, circa 1905.

Ms. Sinclair, who grew up in Chelsea and has been doing magic since she was 9, has been building her collection for more than 30 years. “I have the largest library in the world of female magician ephemera,” she said. “More than 10,000 pieces: documents, apparatus, books, the how-to’s of the past.” She hopes to turn her holdings into a traveling museum exhibition at which she would perform.
Also tucked out of sight in her conjuring room are the switches and wires that aid her act.

“I don’t want to say it’s rigged, but it is — rigged in the same way that séance rooms were back in the 19th century,” she said. “Some things explode, some things move around. Books fall off the shelves. Things happen.”
On a recent Sunday afternoon, nine spectators squeezed into her parlor as she sat at a little table covered with black fabric and kept up a steady patter, rewinding and fast-forwarding through the centuries as her hands made things disappear and reappear.
Ms. Sinclair asked a young woman to name a dead person she wished to invoke, then handed her a miniature xylophone. As the woman hit the notes, a bell hanging by a string from a metal bar across the room began to swing. The string burst into flame and the bell dropped.

Ms. Sinclair went around the room asking everyone to name a dream.
“To live in Rome,” said one woman, Rymn Massand.
Ms. Sinclair shifted into motivational-speaker mode. (She is also a hypnotist and a corporate consultant.) “At the moment of commitment, the universe conspires to help us.”

She handed another woman in the audience a small wooden box tied shut with a purple ribbon. She had Ms. Massand shuffle a deck and pick a card, write “Rome” and her name on it, put the card back and shuffle the deck again. The deck sat on Ms. Sinclair’s table.

The woman with the box was instructed to offer it to Ms. Massand. “A dream does not belong in a box,” Ms. Sinclair said, and told Ms. Massand to remove the ribbon and open the lid. Inside was a playing card, folded in four. It was hers.
Bewildered, grateful applause spread across the little room.
Afterward, Ms. Massand, an art director, pronounced Ms. Sinclair “brilliant but also part therapist,” and added, “She brings you back to thinking things are possible.”
That, Ms. Sinclair had said in an earlier interview, was the whole idea: “What I’m trying to show you is a lost art. And it has everything to do with making somebody feel better about themselves.”
Posted by Tom Casesa at 11:48 AM