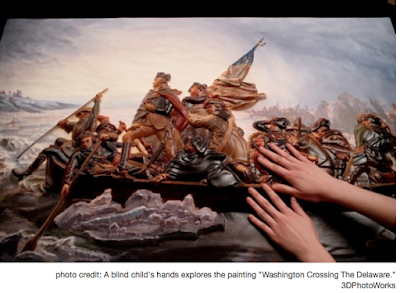 What a great idea.
(Reprinted from IFL Science)

3D Printing Lets Blind People "See" Paintings
With the help of computer software and 3D printing, a company called 3DPhotoworks is hoping to open-up a whole new world of painting and photography to blind people.
Their process involves scanning 2D paintings and converting them into digital data. Using computer software, digital conversion specialists "manually" include information that can account for the sense of depth in the images. This information is then given to a 3D printer, which creates a 3D print of the painting, complete with contours and texture. This printing process allows up to 4.5 centimeters (1.75 inches) of relief depth.
So far, the technique has been used to produce three-dimensional versions of some of the fine-art world's most lionized masterpieces, such as da Vinci’s "Mona Lisa," Emanuel Leutze's "Washington Crossing the Delaware" and Van Gogh’s "Dr. Gachet." However, this is just the beginning – they also want to move into the realm of photography as well. 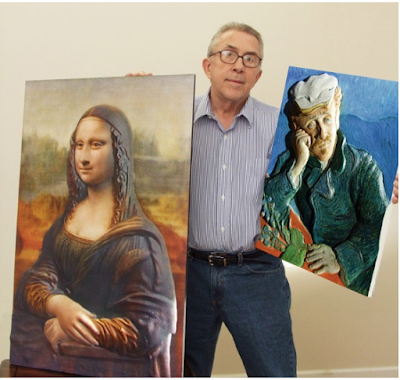 John Olson created the company eight years ago. Speaking to IFLScience, the photojournalist-turned-engineer explained what inspired him to start this ambitious project: "Photography took me everywhere and allowed me to live a very comfortable life. Toward the end of my second career in engineering, I realized how incredibly important images had been to me."
He added: "I started to wonder what my life would have been like without them and what life was like for the blind without images. That prompted me to sit down one weekend, eight years ago, to develop a printing process that allowed blind people to see."
The company started a Kickstarter campaign last year to get the pennies rolling and scale-up their operation. Although it failed to reach its hefty $500,000 goal, the project is up and running and already boasting exhibitions in North America.
In February 2016, they are booked for an exhibition at The Canadian Museum for Human Rights. This show hopes to create 3D sculptures out of photographs taken by 13 different blind photographers, all with varying degrees of vision loss. 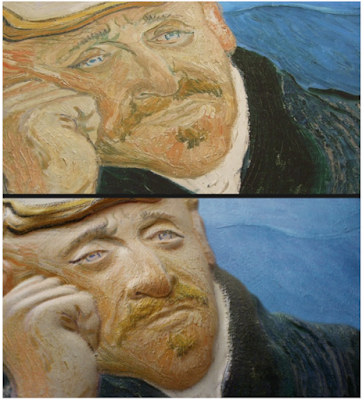 Romeo Edmead, a writer, has been blind since he was two years old. However, at a New York library he got to explain his experience with this whole new world.
"All my life we've all heard of famous painters and their works. But to me, that's all they were," Edmead told Reuters. "They were like vocabulary words I could write down on the page but I didn't necessarily know how to put a physical picture together.
"Something like this presents that opportunity, that freedom to get a better understanding. It's one thing to have something described to you. But if you never could see before and have no memory of seeing like me it's a whole different ball of wax when you actually get to touch it."