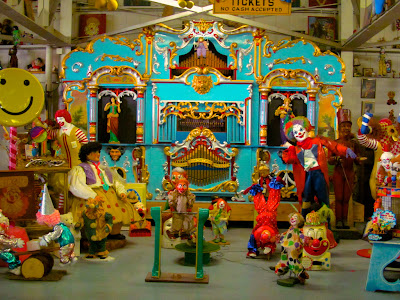 So interesting.. I just came across this photo and found that it is from a museum/attraction in Pennsylvania called  American Treasure Tour.  It's a huge collection of Americana (three acres worth) housed in an old Burlington Tire factory.  Adding to its strangeness is the fact that it's owned by one person who wishes to remain anonymous.  Visitors are not free to walk around.  Instead, they see the artifacts by taking a guided 90 minute tram tour.  The museum (if that's the right word) has collections of nickelodeon's, vintage cars, toy, dolls, amusements, music, and assorted oddities.  A news story on it's site says the organ in the picture above was once owned by Walt Disney.   The Ronald McDonald clown seems a little out of place, but is at least a little less creepy than the clown with the multi-colored afro or the fat woman figure in the polka dot dress and purple vest.
Posted by Tom Casesa at 2:54 PM