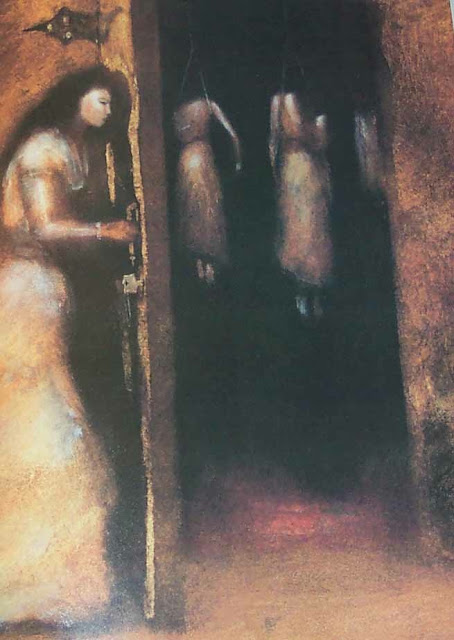 Prior to finding this provoking image "Bluebeard's Secret Chamber" (a painting by Matt Mahurin) I was unfamiliar with the story of Bluebeard.  I learned that this fascinating tale (especially for those who like secret chambers and hanging corpses) was penned by Charles Perrault and published in Paris in 1657.  This story, and his other works are available for free at Project Guttenberg.


(By the way, Matt Mahurin's site is well worth a vist).

Bluebeard is an immensely wealthy aristocrat, feared and shunned because of his "frightfully ugly" blue beard. He has been married several times, but no one knows what became of his wives. He is therefore avoided by the local girls. When Bluebeard visits one of his neighbours and asks to marry one of her two daughters, the girls are terrified, and each tries to pass him on to the other. Eventually he persuades the younger daughter to visit him, and after hosting a wonderful banquet, he convinces her to marry him. After the ceremony she goes to live with him in his château.
Very shortly after, Bluebeard announces that he must leave the country for a while; he gives all the keys of the château to his new wife, telling her they open the doors to rooms which contain his treasures. He tells her to use the keys freely, and enjoy herself whilst he is away. However, he also gives her the key to one small room beneath the castle, stressing to her that she must not enter this room under any circumstances. She vows she will never enter the room. He then goes away and leaves the house in her hands. Immediately she is overcome with the desire to see what the forbidden room holds, and despite warnings from her visiting sister, Anne, the girl abandons her guests during a house party, and takes the key to the room.
The wife immediately discovers the room's horrible secret: its floor is awash with blood, and the murdered bodies of her husband's former wives hang from hooks on the walls. Horrified, she drops the key into the pool of blood. She flees the room, but the blood staining the key will not wash off. She reveals her murderous husband's secret to her sister, and both plan to flee the castle the next day. But Bluebeard returns home unexpectedly the next morning, and, noticing the blood on the key, immediately knows his wife has broken her vow. In a blind rage he threatens to behead her on the spot, but she implores him to give her a quarter of an hour to say her prayers. He consents, so she locks herself in the highest tower with Anne. While Bluebeard, sword in hand, tries to break down the door, the sisters wait for their two brothers to arrive. At the last moment, as Bluebeard is about to deliver the fatal blow, the brothers break into the castle, and as he attempts to flee, they kill him. He leaves no heirs but his wife, who inherits all his great fortune. She uses part of it for a dowry to marry off her sister, another part for her brothers' captains commissions, and the rest to marry a worthy gentleman who makes her forget her horrible encounter with Bluebeard.
Posted by Tom Casesa at 10:41 AM